Released monthly, this report by Coinscious aims to analyze and characterize cryptocurrency exchanges according to their volume for the past month, this time from January 16, 2019 to February 16, 2019.

Our universe of analysis uses public exchange data from 18 of some of the most popular exchanges (see Figure 1). Through analysis of the recent historical volume and price of individual exchanges we provide a framework for analysis where investors can identify better or fairer exchanges.

Using daily volume data from some of the most widely used cryptocurrency exchanges, we were able to cluster exchanges into three groups based on similarity in volume trends. 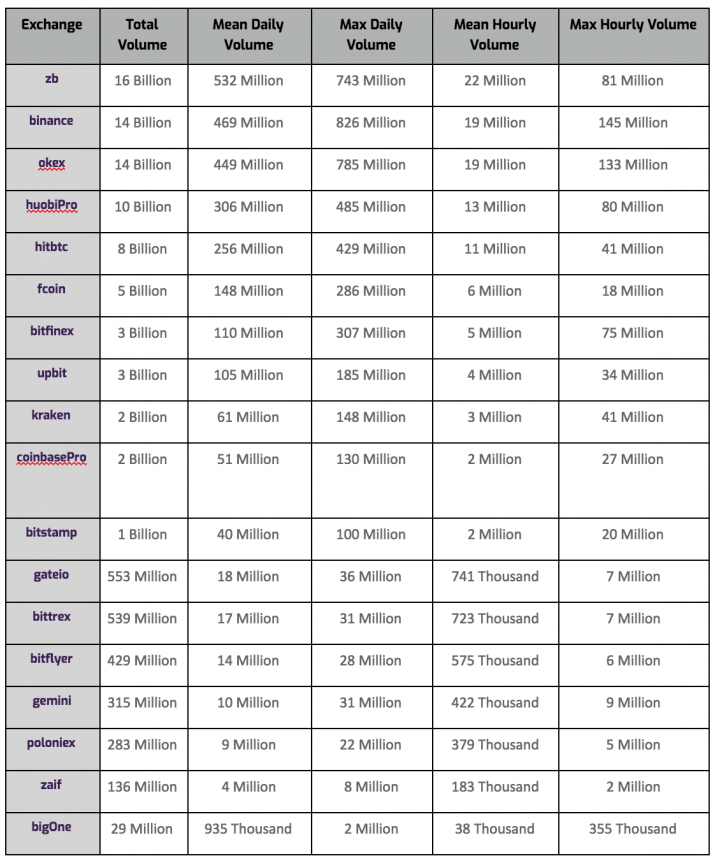 According to the public exchange data, ZB has reported the biggest mean daily and hourly volume for the past month. Binance reportedly lost the crown as the king of cryptocurrency by trade volume on December 11, 2018 to be replaced by OKEx, who held the 1st place at that time, while ZB held 2nd [1].

In the past month, ZB has taken the first spot, with a total of 16 billion dollar traded between January 16th to February 16th, compared to 14 billion USD for OKEx (2nd) and Binance (3rd) (see Figure 1).

We then chose ETH/BTC pair to look at the volume more closely and analyze it in more depth. ZB traded volume for ETH/BTC is low during the whole period, with Binance, HuobiPro and OKEx as top exchanges. However, there was a rapid surge on February 11th, when volume changed from $500,000 USD to $67 million USD in one day, and it has remained high since then (see Figure 2). That same day,  according to Etherscan, daily mining rewards for Ethereum fell to their lowest recorded levels [2].

In order to categorize exchanges and investigate their trends during the past month, we performed a dimensionality reduction analysis using PCA for ETH/BTC pair daily volume. By plotting crypto exchanges according to their first two principal components, we could identify a cluster and some outliers (see Figure 3). The two first principal components explain more than 80% of the variance in our data set and the relative position along the x and y axis indicates similarity between exchanges in terms of traded volume. Thus, exchanges clustered together present similar volume trends, while outliers, namely Okex, HuobiPro, Binance, Fcoin, HitBTC, and ZB, show trends that diverge from the market mean.

Figure 3. PCA Volume analysis for ETH/BTC. The biplot, where the two main principal components are used to represent the exchanges allows us to identify clusters or groups of exchanges that might be correlated according to volume.

To understand the meaning of the two principal components and characterize the outliers, we decided to look at correlation between exchanges using volume for the ETH/BTC pair, to identify a general trend in the market and whether exchanges follow or are against the trend (see Figure 5). Although most exchanges show a similar trends (this is, they follow a similar daily volume trend), Bitflyer, ZB, Zaif, Fcoin, and HitBTC show a daily volume trend that goes against the market.

On the other hand, Upbit and Bittrex show the highest correlation for all exchange pairs. This similarity in volume is in line with reports suggesting that they share the same order book, although further analysis of blockchain data will be needed to confirm these claims [3].

To explore what other factors could contribute to the clustering in different groups after Volume PCA, we calculated the correlation between ETH/BTC price and volume for every exchange pair (see Figure 6).

Again, Fcoin stands out as the exchange with a highest negative correlation between ETC/BTC price and volume for all exchanges showing that, not only the volume, but ETH price is also against the market. While most exchanges show a positive trend, with high volumes associated to higher prices, Fcoin shows a negative trend, where higher volumes during the analyzed period are associated with lower prices and vice versa.

This raised suspicions that Fcoin might be manipulating price and volume, especially for the pair that we have analyzed (ETH/BTC). Fcoin has been accused of manipulation in the past. In September, a Chinese investor filed a complaint against the exchange, which presumably induced sudden drops in price through manipulation after investing huge amounts in Fcoin token [4].

Finally, if we look at the correlation between returns (instead of price) and volume for ETH/BTC (Figure 7), HitBTC and Fcoin are again the exchanges going against the general trend. High returns in HitBTC and Fcoin are associated with an increase in volume, while high returns elicit a decrease in volume for the rest of exchanges (negative correlation between returns and volume). Interestingly, HitBTC has also been accused of volume manipulation [5].

Using daily volume data from 18 of some of the most widely used cryptocurrency exchanges and principal component analysis, we identified three clusters of exchanges sharing similar volume trends. We mainly looked at volume correlations and price-volume correlations. Our findings include:

Here, these findings are simple observations of possibly correlated variables. We share this from the point-of-view of something to look out for. Overall, our exchange analysis has proven useful to study patterns of volume and price activity in the market and identify potential manipulation, that could be confirmed using blockchain data.

1 The scope of this report does not cover futures contracts.

2 PCA is a technique that finds underlying variables that best differentiates your data points. In this article, we visualize and analyze along the two dimensions which the data points varies the most (see Appendix B).

3 Here, the market is refers to the trend of majority of the exchanges

The daily volume of cryptocurrencies in USD at 4:00 PM EST from January 16, 2019 to February 16, 2019 was used for our volume ranking. Daily volume and price for the pair ethereum/bitcoin was used for the same time period for the PCA analysis and correlation analysis. Price and volume were normalized such that its distribution had mean value 0 and standard deviation of 1 in order to perform principal component analysis and calculate price-volume correlations. In subsequent reports, we may update our universe, sectors, methodology, and analysis to reflect new developments.

Coinscious was established in 2018 and in Canada, Europe and China. Coinscious uses sophisticated financial engineering and quantitative technologies, such as statistical modeling, machine learning, market structure, and risk management techniques, in order to facilitate the maturation of the cryptocurrency market through various tools and data services.